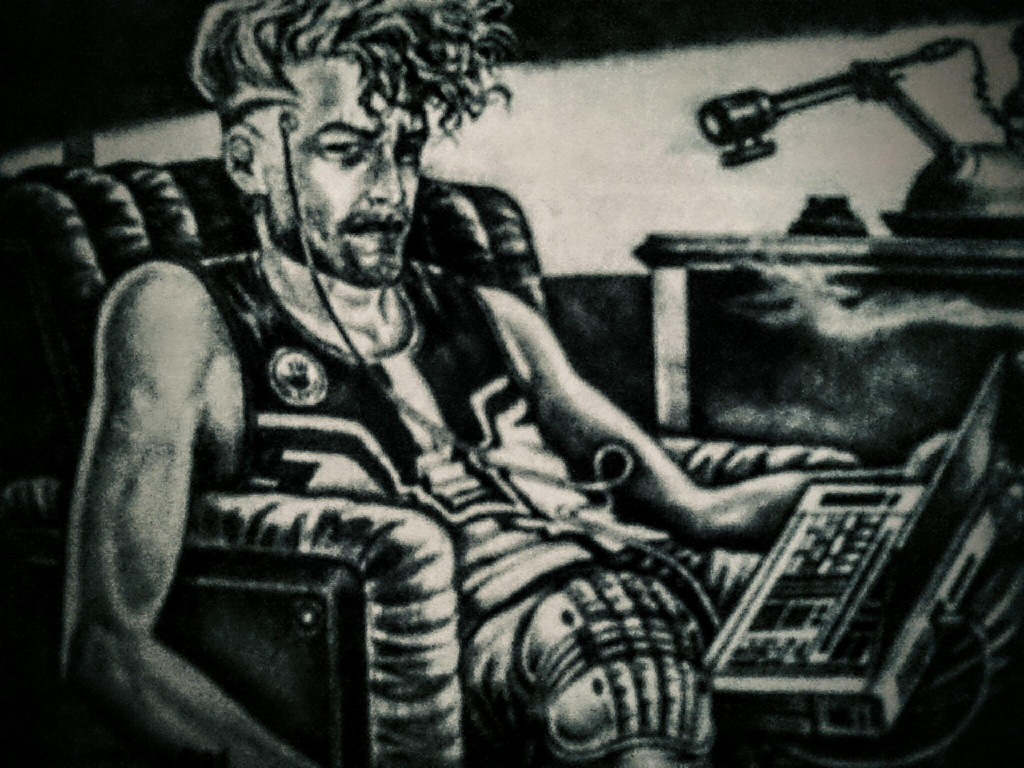 As a teenager, i was hooked on cyberpunk. One of the core aspects of the cyberpunk genre is to live outside of government and corporate control as some kind of shadow-running outlaw, and using custom-made electronics and self-written software to jack into cyberspace, hack into secure systems and fight powerful AIs. Many, including me, consider the defining novels to be William Gibson’s Neuromancer series. Therefore, when i read about a guy hiring a neurosurgeon in Belize to get electrodes implanted in his brain, i assumed to be reading a William Gibson novel.

Yet, this guy was Phil Kennedy, developer of the neurotrophic electrode (.html). In a recent report (.html), he reports to have went to Belize because the FDA prohibited any further implantation in humans. But he wanted to record electrophysiological patterns during speech production in healthy subjects. So, after years of deliberation, he hired a neurosurgeon to implant said electrode in his brain. He didn’t care about governement involvement, and developed the tech mostly his own. In my eyes, Phil Kennedy is the first shadowrunner.

Another aspect of the cyberpunk genre is that the heros often act in a grey legal and ethical area. Some i talked to consider Dr. Kennedys actions as dedicated, some as inappropriate, some as desperate. Frankly, my impression is awe and respect for his actions. Was my impression biased by my love for cyberpunk? Being trained as a bioethicist, i decided to ponder a little deeper upon the ethical implications of implanting electrodes into your brain for research.

I’ll start with testing the categorical imperative. A maxime-like version of Dr. Kennedys action might be “collect data to guide clinical research on yourself”. Is this motivation internally consistent, i.e. is a world, in which everyone would do as Dr. Kennedy did, internally consistent? I think yes. Some might argue that doing so would result only in case series with bad statistical properties, rendering research inadequate, but the maxime does not prevent that researchers organize to run a proper study on themselves. Insofar, the action itself would not become logically or practically inconsistent and is therefore not a priori forbidden. Whether it is permissible or mandatory will be discussed in the following.

I would like to base this discussion on the set of moral principles which are possibly affected. Let’s first start to collect a list of principles. Professional medical ethics knows beneficience, non-maleficience, respect for autonomy and justice [1]. Research ethics is focused on transparency, data privacy, informed consent and scientific misconduct. Brain-computer interface ethics has been discussed in regards to privacy [2], informed consent and communication with media [3]. Brain implants for BCI have additionally been discussed in regards to identity/authenticity, agency, and stigma [4]. Furthermore, neuroenhancement can be an issue [5]. Quite a list! Let’s start…

Professional and most of medical and some of research ethics is relevant only within a professional-client (subject-researcher) relationship, to protect the client against the professional. When out of this interpersonal relationship, as is the case here, the principles become irrelevant. Regardless, agency, autonomy, informed consent and privacy were certainly satisfied. Additionally, the intervention was published on Kennedys website and on scientific conferences and as far as i see it, reported openly and never exaggarated, so transparency and proper media communication was satisfied. I strongly doubt that any scientific misconduct was involved. A speech implant in the current technological state offers only slow information transfer and is no means of neuroenhancement. I understand authenticity as being in agreement with oneself, and whether Dr. Kennedy feels authentic in his decision is only for him to decide - i believe he does. This leaves the issue of stigma, and this lies in our responsibility as onlookers and bystanders - not to unfairly judge someone for an ethically permissible action.

Put Shortly: Dr Kennedy might - or might not - be the first shadowrunner, depending on how strongly you fall for cyberpunk. Independent from this, there are good reasons to consider his decision to receive an implant over his speech area for research as ethically permissible.