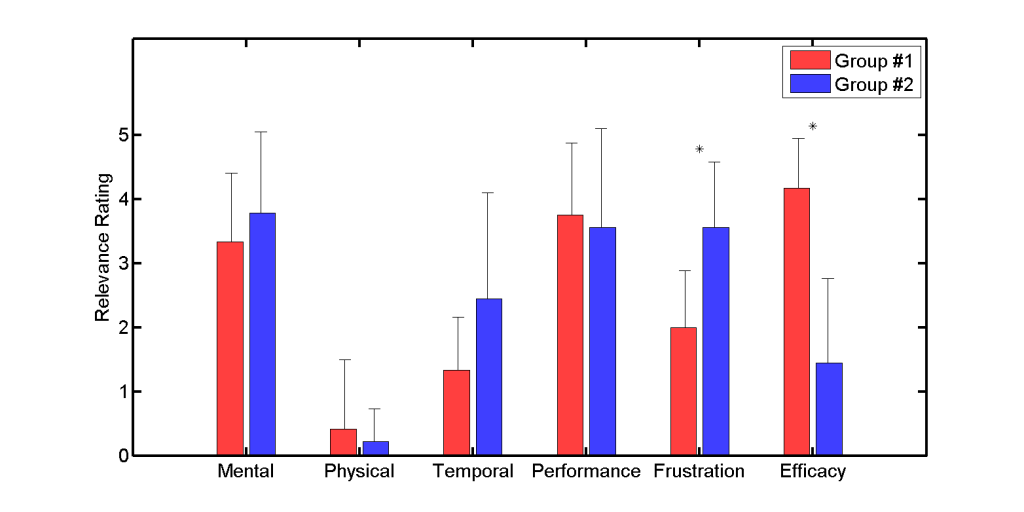 The utility of a restorative BCI depends not only on machine learning measures like classification accuracy, but also on how the subject experiences the intervention. Roughly a quarter of subjects appear to suffer from BCI-illiteracy, i.e. they have difficulty when trying to control a BCI. An interesting question is whether they differ in their experience of the intervention. In that regard, the workload profile of a restorative BCIs can be assessed using e.g. the NASA-TLX. The NASA-TLX allows the subject to rate the work load of the task in six dimensions: Mental Demand, Temporal Demand, Physical Demand, Frustration, Efficiency and Performance.  It provides high validity and is very easy to implement.

To find out how illiteracy might be linked to the perceived task load of the intervention, we recruited 20 healthy subjects, which performed (inter alia) a restorative BCI task based on sensorimotor β-modulation, and let them rate the workload profile on the NASA-TLX [1]. We found that mental demands were rated as most relevant - but physical demand was rated very low. This is in nice agreement with the findings of Hammer et al., which report that the ability to concentrate on the task is predictive of performance [2] .But more interestingly, we found that two groups were present in our dataset (using the Calinski-Harabasz criterion to define the number of clusters and K-means euclidean distance clustering):

The subjects rated the objective demands of the task with high agreement, i.e. mental, physical and temporal demands did not differ between the groups. But they did differ in regard to their experience of frustration and efficacy. This is similar to the findings of Nijboer et al., which reported that subjects could be differentiated based on mood and mastery confidence [3]. While some subjects experience BCI to cause high frustration and low efficacy, other experience it the other way round. We argue that these emotional and motivational aspects can be understood as the feeling of being over-challenged or under-challenged by the task. This appears not to be related to the perception of the objective task demands.

One might postulate that the aspect of being challenged adequately should be leveraged for further improvements of restorative BCIs, e.g. by adaptation of the task difficulty. Lotte et al. argued in such a fashion [4], and we recently demonstrated on similar theoretical grounds [5], that the difficulty of a restorative BCI based on LDA can be adapted using a difficulty threshold. This study presents empirical evidence that, for a restorative BCI, the feeling of being challenged adequately appears to be more important for the final experience than the actual task demands.

Put shortly: Subjects rate the objective task demands of a restorative BCI with high agreement, but differ in regard to their level of frustration and feeling of efficacy, i.e. whether they have felt over or under-challenged by the task. Leveraging this feeling of being challenged adequately might therefore open new possibilites to improve restorative BCIs.