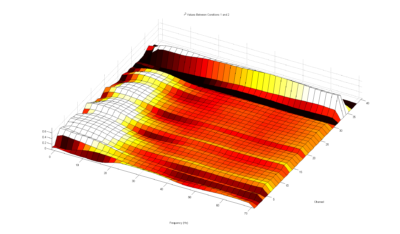 There is a major aspect which i believe is especially prevalent in the area of BCI for Stroke Rehab. It is the apparent gap between how Brain-computer-Interface (BCI) people, mostly recruited from mathematics and engineering departments and the Neurofeedback (NFB) people, mostly recruited from practitioners and psychologists understand the treatment. In my opinion this distinction between BCI and NFB is actually the distinction between assistive and restorative BCI. The BCI-community is driving machine learning algorithms forward, focusing on maximizing classification accuracy, adapting feature weights to the point of being afraid of overfit. The NFB-community instead is concernced mostly with the physiological plausibility of the features used for classification, and adresses the question of reinforcement learning, operant conditioning and clinical efficacy.

Put shortly, for assistive BCI one regularizes the classifier for statistical purposes, for restorative BCI one constrains the feature space for treatment effects.

This is in my opinion a major well of confusion between the two groups. I experienced this confusion in reviewers responses, in audience questions during conferences and it is easy recognizable in each disciplines publication titles. In my opinion, the reason for this confusion is pretty obvious. Take a look at an off-the-shelf SMR-BCI-approach for stroke rehab, where cues indicate the start and stop of a trial to the patient, and the patient is instructed to start motor imagery during the trial. Obviously, safe serious cognitive issues, all patients will perform motor imagery. We could rationally expect a 100% classification accuracy. Yet, some patients will be able to perform better than others, i.e. longer, stronger, more complex, more vivid etc. This would be recognizable in appropriate physiological measures, and therefore affect the accuracy of the classifier.

Should we now start to adapt the classifier to give the poor performers a lift? This would be like changing the questions of a quiz if the pupil is not good enough - or weighting them different for the final grade. It comes at the cost of making the results not comparable anymore. Furthermore, it makes operant conditiong obsolete, as the target behavior changes. Would you trust a clinical study, in which every patient was receiving a different kind of medication? We can plausibly assume that during the trial, every patient is performing motor imagery - only at different levels of ability. Disentangling which feature weighting will cancel noise, but still allows to reinforce the ability can be considered a complex issue.

In a recent paper, Alireza Gharabaghi and i argued therefore that - if the goal of the intervention is restorative, as is the case for neurofeedback or stroke BCI - the features should be constrained according to a clinical rationale, and adaptation of feature weights should be performed with utmost caution, if at all.